This week, we take a look at the recent API vulnerabilities reported at Microsoft and Truecaller Guardians, the new penetration testing labs for API security, and an upcoming webinar on the API security process at Ford Motors.

API endpoints for resetting account passwords are a frequent attack vector. Attackers brute-force these by supplying as many possible combinations of password reset codes as they can within the time window available to them.

Laxman Muthiyah found a way to break into the password reset API for all Microsoft’s online accounts. He requested a password reset code — a 7-digit one in Microsoft’s case — for the target account and then tried to brute-force his way in by calling the verification API with all possible combinations from multiple locations.

Microsoft had actually already taken measures to make it harder to break into the system:

Despite this, Muthiyah managed to demonstrate that he could still get in if he deployed the automated attack simultaneously from thousands of clients. Even if an account was protected with two-factor authentication (2FA), the same operation just had to be repeated for the 6-digit 2FA code.

For his efforts and report, Muthiyah received the award of $50,000. Microsoft has fixed the issue.

We have previously covered a similar vulnerability that Muthiyah reported for Instagram.

Truecaller has recently launched its Guardians app that allows permanently sharing your real-time location with trusted contacts, like your family. Anand Prakash found a way to take over any account in the system and access sensitive information of users and their family members.

The vulnerability lay in the API that allowed users to log into the app using their Truecaller account. All attackers had to do was to first log into their own Truecaller account and then, when going to the Guardians app, substitute their phone number in the payload with that of their intended victim. The app then used that phone number as the ID to match the user with the profile.

This is another example of OWASP API:2 Broken Authentication vulnerability. Be careful with your authentication workflow design, especially when you are looking at a federated scenario and users logging into one system then get access into another.

Penetration testing is best learned by practice. PentesterLab has created a special category and started adding API security labs to their site. One hands-on API security lab is already available, with 3 more in the works.

Perfect opportunity to get some hands-on experience.

Rolling out a successful API security program in a large enterprise can be a challenge.

Next Thursday, March 18th at 8 AM (PST),  Darren Shelcusky, Manager of Vehicle & Connectivity Cybersecurity at Ford Motor Company, tells how their process was.

In the webinar, Darren will explain Ford’s approach to API security and their journey to enforce security compliance while ensuring productivity of hundreds of developers managing thousands of APIs. 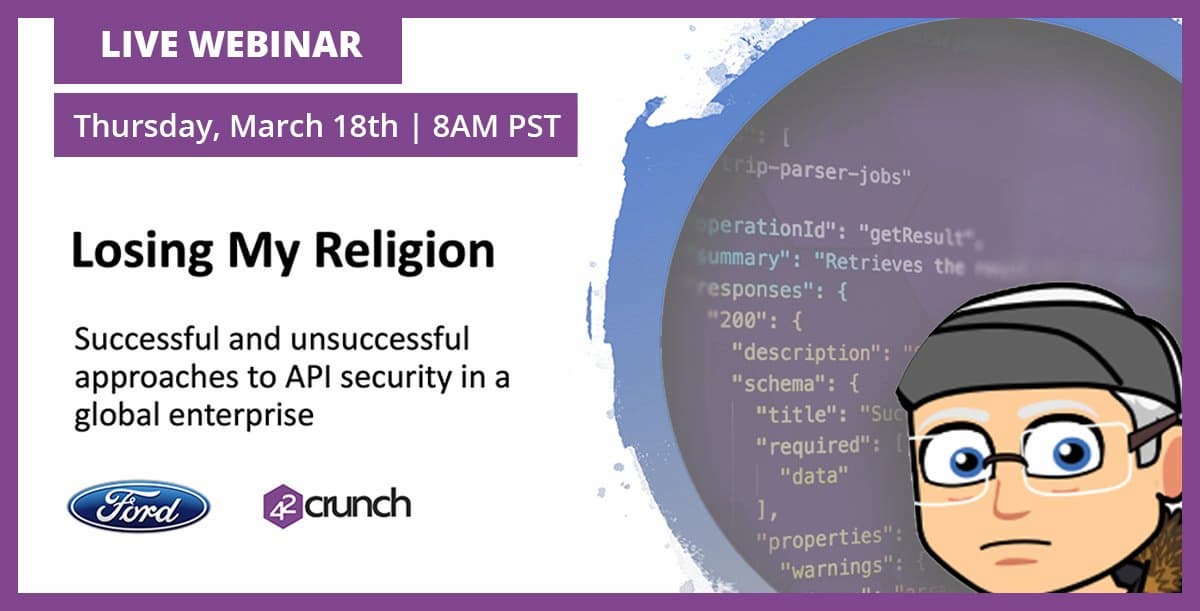